0 shares
Three years ago today, I married my best friend in the whole world. 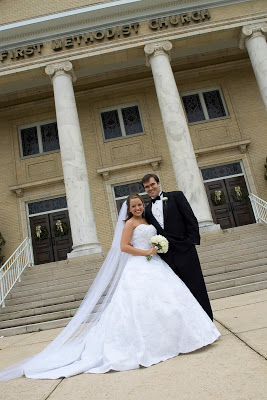 I don’t know what I would do without him, especially after the past few months. He’s my everything.
Two months ago yesterday was one of the saddest days of our life. We found out that we were losing our first baby, and I had to have surgery to end the pregnancy because my body wasn’t doing it on its own.
And yesterday, on the 2 month anniversary of that awful day, we found out that we have probably lost our second baby.
I took a test last Friday, and it was positive. I was in shock. It had only been two months since our D&C, and I really didn’t think it would happen that quickly (it took us four months the first time). After two more tests (including a digital), it finally started to sink in. I had some of the same problems I did with the first pregnancy, but didn’t really think too much of it…I thought that maybe that was just the way my body responds to the hormonal changes. I was on a cloud all weekend. Yesterday morning, we went in for our first appointment. Just as a precaution, my doctor does a urine test when you come in for your first pregnancy appointment. We went through all of the insurance stuff again, went through all of the pre-screening again, and then the nurse came in with the news – they had done two tests and couldn’t get a positive.
I lost it.
We talked to the doctor, and she had us do a blood test (they are much more accurate and can get an exact hormone level). This might mean nothing to most of you, but I’ll mention it for those that know what these levels mean – my hcg reading was a 10, and my progesterone was “very low” (she didn’t say how low). The test I took Friday reads positive at a minimum of 25 on hcg, so we know I had at least that Friday. She said that, at this point, she honestly doesn’t know what is going on. It is more than likely a very early miscarriage. That’s all I can figure. I’ve had negative pregnancy tests since the D&C, so there’s no way it is the leftovers from the last pregnancy.
My body still hasn’t “officially” miscarried on its own this time. I don’t know what the deal is. I am a wreck right now. I took yesterday off work to do the appointment, and I took today off too…just because I didn’t want to lose it in front of the kids, and I’ve been crying pretty much non-stop since yesterday. I just don’t understand why this is happening again. Everybody tells you that it is so, so rare to have two miscarriages, yet here we sit.
I have to go back tomorrow to get another hcg reading, to make sure it isn’t going up and that we just caught a very, very early pregnancy. I don’t think that’s possible though – not with 3 positive tests 4 days before that reading yesterday. After that, I want some kind of testing done, to make sure there isn’t something wrong with one of us. We have no reason to believe that at this point – we’re both healthy, there’s no history of genetic disorders on either side of the family – but something’s not right.
Obviously, we need lots of prayer right now. This is just an incredibly rough time.