0shares
Sorry this is a little late…there were a lot of pictures on Noah’s phone I forgot about! If you missed part 1, you can click here!
The next couple of days on the cruise were still on-shore. On Thursday, we were in Belize. We have been here before too – the last time, we were snorkeling, so we didn’t get to do as much shopping.
The shopping in Belize cracked us up. There were malls of everything that you can’t buy legally in America – ha! It was very interesting to see!
We also went to this place we had gone last time too and loved – The Wet Lizard. It’s right at the port and has AWESOME food!

They also had the BEST conch fritters IN THE WORLD!! We both agreed we should have just gotten two orders of these (because I stole half of Noah’s!). 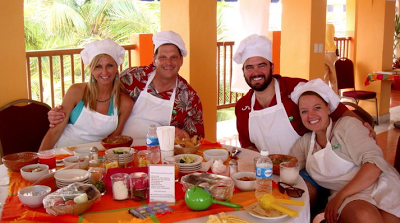 Us with the other couple at our table…they were from Mississippi. She was a 1st grade teacher! And they were really sweet!

This is everything on your table when you get there. You get to make everything from salsa to guacamole to this REALLY awesome fruit dessert salsa! I would highly recommend this if you’re going to Cozumel or Cabo anytime soon.

The after. We made a little bit of a mess. 🙂

Noah was the lucky one that got picked to wear a sombrero in the group picture! 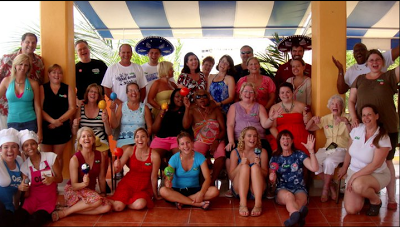 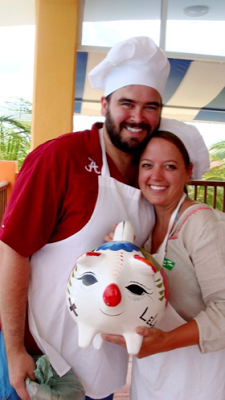 They also had this pretty cool idea…this is “Lela.” It’s their donation pig. Every month, they pick a new charity from around the world to raise money for. This month, it was for the Joplin Humane Society, which I thought was cool by itself. But something came up about us being from Tuscaloosa, and one of the hosts says, “Oh, Lela was for Tuscaloosa last month!” Almost lost it right then and there.
Turns out, they donated to the DCH Foundation’s fund for DCH employees last month…how cool is that? Needless to say, we contributed to Lela and got this super cool picture in return. 🙂
______________________________________________
I said I was going to do a photobucket album of just food..but then I realized how long it would take me to upload all of the pictures (probably over 100) of food from our phones. Ain’t happening. I will show you the BEST meal (in my opinion, I don’t know about Noah) we had!

Who would have guessed that Leslie would think the sushi meal would be the best? 🙂  No kidding, just about the best sushi I’ve ever had.

Noah’s plate. Not my style, but he liked it.

I didn’t have many pictures from the last two days…we really just laid out all day the last day (and I have 15 different shades of tan lines to prove it), and were off the boat by like 9 the next day.

Noah’s parents (who live about 2 hours away from New Orleans) drove down Sunday to pick us up. We took them to one of our favorites, Palace Cafe, for father’s day lunch, and hung out with Noah’s dad for the rest of the day. Great ending to a great vacation!
All in all, it was a great week. We needed something like that so bad. I feel so much more focused and ready to deal with the next few months (or years, who knows) now!

This is seriously like packing all of the flavors

I've got a super simple method for making boiled e

How are you refreshing your home for spring? #ad O