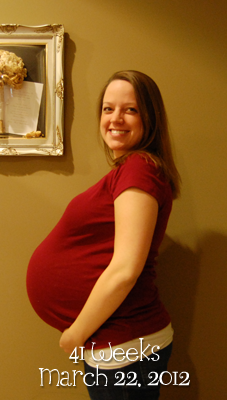 Woah…did not think I’d be writing this post. But we all know how plans work out…you would think I would have learned this lesson by now. 🙂

Size of Baby: BIG. As of last Friday, she was measuring 8 lbs, 15 oz on the ultrasound. Now those aren’t perfect (they can be about a pound off either way), but that gives us a good idea of what she will be. And the ultrasound tech told me yesterday that they can gain 1/2 to 1 pound a week…so we may be looking at a 9-10 pound baby easily. Yeah…I know.

Total Weight Gain/Loss: I think I was still up like 25 pounds as of yesterday…to be honest, I’ve quit paying attention. 🙂

Maternity Clothes: I’ve been pretty much living in Noah’s shirts (the big ones, mind you, not his normal ones) and Nike shorts, since I’m at home. I have one pair of jeans that still fits (see picture), and if I wear an undershirt under my maternity shirts, I can get away with those.

Gender: It’s a GIRL! Emma Ramey. They actually “confirmed” this with the ultrasound Wednesday, which they said is pretty rare to be able to do at this point!

Belly Button In/Out: Just barely out. She still likes kicking it way out every once in a while too.

Stretch Marks: Well my belly button’s just a hot mess by this point…I am scared to see what it looks like after this. But I’m still holding out with no stretch marks besides that! I do have one weird thing…my tummy got really itchy a few nights ago, which happens every once in a while. I scratched it, just like normal, for maybe 5 seconds, and went on about my business. Well I’m changing later on, and I have these weird red bruise looking things where I scratched now! They’re underneath the skin, so it just looks like I broke blood vessels all around my belly button. It’s strange – I’m guessing my skin is just so stretched and sensitive? And my stomach’s peeling now…very weird, because it sure hasn’t seen sun in 9 months.

Labor Signs: Still next to nothing. Occasionally I’ll have contractions, especially in the late afternoon and night, but nothing consistent at all. This child has every intention of graduating high school in there. 🙂

Movement: Her or me? 🙂  For her – slower. Every few days, she has a really active afternoon where she kicks and kicks…then she’s a little slower for a day or two after that. She has found my bladder, and it HURTS when she kicks it! And her little bottom is in my ribs. If she gets in the right position, it puts a lot of pressure on those. Poor baby – Momma just has a small torso and she’s a big girl! I will definitely miss the kicks, but they have gotten painful in the past week or two. For me – movement doesn’t exist anymore. 🙂  I am slow getting around, I can’t bend over, standing up after laying/sitting is a workout, even rolling over in bed is a challenge.

Sleep: For 41 weeks pregnant, not too bad now…it goes through its phases. I can only sleep 7-8 hours max before I’m wide awake…I’ve tried sleeping in, and it just doesn’t work. I’m still waking up every 2 hours or so to use the bathroom and roll over/change positions in bed. But it has gotten a little better over the past few days!

What I miss: See previous posts…still all of that. 🙂

Cravings/Aversions: Nothing really big. I’ve been back on the fruit/veggie kick in the past few days, and have been thirsty…if I don’t get enough water, I just don’t feel good.

Symptoms: Just not being able to function. If I’m on my feet for more than a few minutes, I will definitely feel it the next day…it feels like I ran a marathon I’m so sore. Occasional contractions (mix of Braxton Hicks and painful ones), tiny bit of nausea every once in a while, still a little acid reflux if I eat something spicy, back aches pretty much constantly. Nobody said being this pregnant was fun…it’s not. But TOTALLY worth it!

Best Moment This Week: Being able to be at home! You deserve some kind of award if you try to work after your due date…seriously. I feel guilty that I’m not working, but there’s just no way I could do it right now. I feel like I’ve been hit by a truck if I do anything for more than 10 minutes – I can’t imagine being on my feet all day. So I have been doing LOTS of sitting on the couch and lots of naps…it’s really nice!