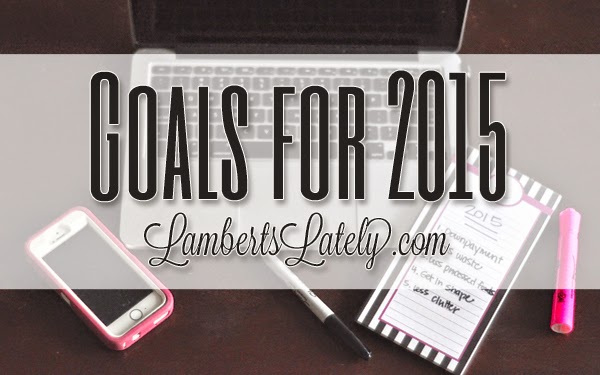 I love the fresh start of the new year. It always feels like a blank slate that you can fill in any way you’d like.

For 2015,  I’m continuing some goals from last year and setting out for some new ones.

1.  Have a downpayment for our home ready for January 2016.  When I began 2014,  I fully thought we would be buying or building that year. Not so much. Early on, I found out a fun mortgage rule that I had never seen: when you’re on a commission-based income (which Noah is), and you change industries (which Noah did in late 2013), you have to have 2 calendar years of income proof before you apply for a mortgage, unless you’d like to use only your base salary (which is a very small part of Noah’s income).

So that means we can’t even think about buying/building until next January…and that’s if we can get all of our tax documents together that quickly. Good times. So, we’re stuck renting for now and Noah and I have made it our goal to really save this year and have a great down-payment for a home for about a year from now. We’re currently leaning towards building, and there are all kinds of things to consider for financing that. I mostly leave the details of that to Noah, considering he sells mortgages. But, I know the numbers, and I know how much we need to put aside each month for the downpayment we want. We’ve really tried to cut some of our budget areas to accommodate for the extra savings.

As of right now, the plan is to start meeting with builders and looking at buying a lot late this year, just so we have all of our ducks in a row and we’re ready to go once we’re able to get the financing we need. My ultimate goal is to be in a home by Christmas 2016!

2. Be more intentional with supplies in our home.  This might sound strange, but it’s been on my mind lately. I don’t think I’ve been as organized with the things I buy for our home each week…namely food. We throw away a lot more food than I care to admit, and it bothers me.

So, I’m making a commitment this year to really try to use the resources we have before I go out and buy more. That means I’m going to need to work harder to meal plan with what we have, rather than finding a need to buy new things. I absolutely love using eMeals

, but I’m going to start planning a few meals a week based on what is already in our home. I’m also making a commitment to use up supplies/toiletries in our home before I buy new things. Hopefully this will mean less waste and more room in the grocery budget!

3. Cook with less processed foods.  Do y’all get that “food hangover” feeling after the holidays? I do. And I hate it. I can so tell that we’ve been eating way too much junk, and I really want to get back on track. I switched my eMeals

plan over to the clean eating setting this weekend, and I’ve had fun browsing their cleaner meal options! I was a little worried they would look unappetizing, but they really don’t.

4. Get in shape. Because it wouldn’t be a list of Leslie’s New Year’s Resolutions without this one. 🙂 I’ve been terrible about making it to the gym for the past month or two, and it shows.

I’m hoping that cutting out some of the processed foods from our diet will help some with this. I’ll also be counting calories (myfitnesspal.com is my jam), and working out at least 3 times a week. I’m putting my fitbit back on too…there’s nothing on earth that keeps me more accountable than this! Noah and I just bought a fitbit aria scale, which syncs with your fitbit and calculates body fat percentage too. I’m excited about it!

5. Declutter. Simple as that – have a home that isn’t cluttered. It drives me crazy. I’d like to take it one step at a time, and maintain the areas that I’ve already tackled.

Of course, those are the big-picture ideas.  For January, my goals are to…

1. start using the emeals clean eating plan, putting in meals here and there that use up some of our random leftover foods.

3. sell our old cars.  Yes, the cars we replaced last summer. We just haven’t gotten around to selling them, and they’re doing nothing but aging and costing us in insurance each month. No point in keeping them around! Hopefully the proceeds from this will help us…

4. pay down a good chunk of our credit card debt.  We don’t have a ton, but there is some that is just gnawing at me. I hate paying interest each month…it feels like such a wasted expense. Before we start saving for our home downpayment, I’d like to get rid of these (and maybe even our remaining car payments, but I think that’s wishful thinking).

5. prepare our Tuscaloosa condo to put on the market.  This is something we’ve been thinking about for awhile. It’s hard to maintain it from 3 hours away, and we’d like to eliminate that cost before we look at buying/building. It needs a little bit of maintenance, so we’re planning a mini trip this month to hopefully knock all of that out.

6. organize some/donate some/pack up some of Emma Ramey’s toys.  Y’all, they’re out of control. We don’t live in a huge space right now, so toys have started taking over. It’s got to be tackled.

I think more than anything, I’m writing these goals on a public forum for some accountability. If it’s here for all the world to see, I’m hoping it will put me in gear towards accomplishing these. I’d like to revisit these each month…I’ve seen other blogs do it, and I always like reading those posts!