Here we are at 6 months already! Now that I’m out of the rough part, this pregnancy is really flying by so fast that I can’t keep track of it. Is it bad that I had to look up how far along I am last week because I honestly couldn’t remember? #2ndbabyproblems
Here’s what pregnancy is looking like at 6 months along. You can see my other monthly pregnancy posts (for Jackson and Emmie) here!
Size of Baby: As of this week, he is about the size of a head of cauliflower…around 2 pounds and about 15 inches long (that seems so big!). We have another ultrasound next week so we’ll find out more specifics then!
Total Weight Gain/Loss: Oh, trust me, weight gain isn’t an issue anymore. 🙂 As of last week, I was up about 19 pounds from pre-pregnancy. That’s compared to being up 8 pounds at this point with Emmie. Yowza.
Maternity Clothes: Basically no way to wear non-maternity clothes now unless they were really loose to begin with. But, like I’ve mentioned before, I’m in yoga pants and t-shirts most of the time, so it really isn’t a big issue. I did break down and buy a few pieces of maternity clothing a few weeks ago, but that is IT.
Gender: It’s a boy! Jackson Lee Lambert
Movement: So, so much! He is especially active later at night (we need to change that schedule a little in the next few months). Noah’s has told me he’s felt him kick a few times in the middle of the night. We’re starting to see bigger movements across my belly too!
Sleep: Not terrible, I can’t complain. Rolling over in bed is starting to become a little bit of a challenge, and even attempting to sleep on my belly is a no-go at this point.
What I miss: Really not much…getting around is starting to get a little bit uncomfortable, so I do miss walking and being active.
Cravings: Not a whole lot – that’s one thing that has surprised me about this pregnancy, the lack of cravings! I’m just so thankful to actually want food again after the first trimester.
Symptoms: A little bit of achiness in my back/legs, morning sickness (maybe for 30 minutes every morning…much better than it was a couple of months ago), some anxiety still, going from starving to completely full in about 4 bites. Besides all that, just a very wiggly little boy to remind me I’m pregnant! 🙂
Best Moment This Month: Seeing and feeling those bigger kicks! It really reminds you that there’s a person in there (which absolutely blows my mind each and every time I think about it).
Here’s your monthly bump comparison with Emmie’s pregnancy (you can read my post from this far along with her here): 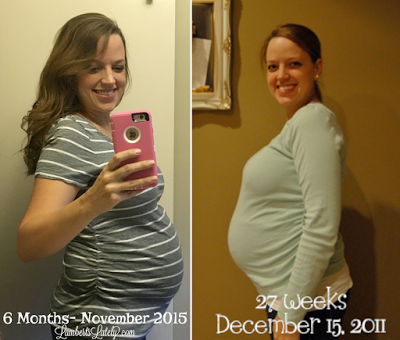 I look and definitely feel like I’m carrying much lower this time! And because everybody loves a good progression shot: