Day 2 of our Disney trip was Epcot. I think we originally had this park planned for another day of the trip, but this day (November 16) happened to be the last day of the Food & Wine Festival at Epcot, so we reworked everything a little bit to make sure we were able to experience that! 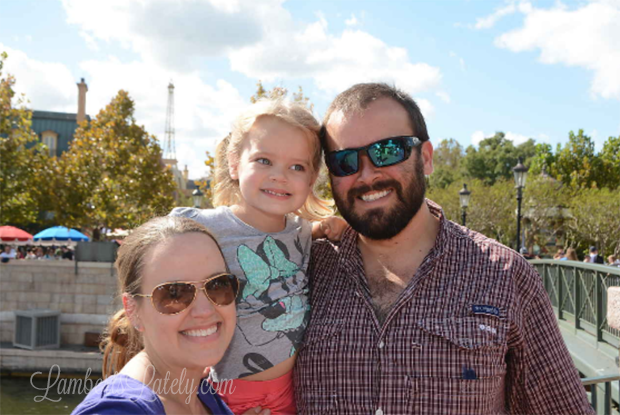 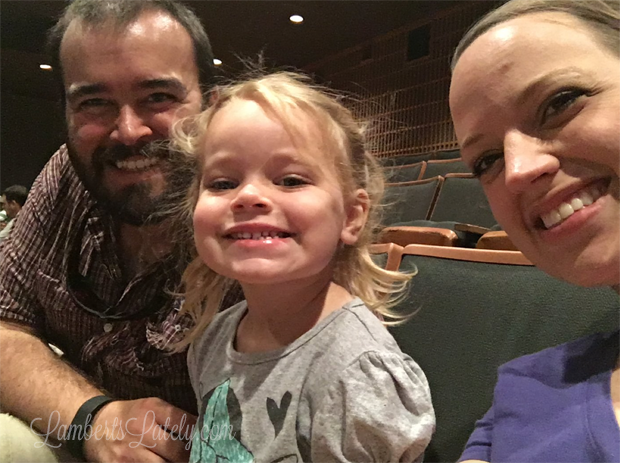 The first thing we did that day was The Circle of Life. It’s a movie-type experience that is Lion King-themed. I think it might have been a little over Emmie’s head…maybe something that would be better for older kids, but still cute.

Next, we had a Fastpass for Turtle Talk with Crush. This was a cute one and a must-do if you’re at Epcot with smaller kids. Crush from Finding Nemo is on a big screen and talks to the kids in the audience…very interactive and fun for them!

After that, we went to The Seas with Nemo and Friends (right next door). I’d recommend Fastpasses for this if you can get them – this was one of the longer waits we had that day. It’s a cute ride though that Emmie loved!

We headed to World Showcase after that for lunch. Like I mentioned, the main reason we were there that day was for the Food & Wine Festival. They have a ton of international foods that use can use snack credits to try, so we just made a bunch of food samples into our lunch. This one above was the Canada Booth – steak from Le Cellier, Chicken Sausage (my favorite of the three), and Cheddar Soup!

The Fisherman’s Pie from the Ireland booth was good, not as good as I thought it would be.

They also offered sushi in Japan. Good, but I really, really wanted that uncooked hand roll they were offering. 🙂

And, what ended up being my favorite booth, the Croissant aux Escargots and Boeuf Bourguignon from France. So, so good!
Noah also got a beer flight from Germany. There were several wines I hate I wasn’t able to try, they sounded so good! The Craft Beer booth had a flavored beer flight that had my name on it. Maybe next time. 🙂

We did Journey to Imagination with Figment…this is a cute one for younger kids, even if you don’t know the characters (Emmie didn’t). They also have a play area outside that is fun. It reminded me of McWane Center in Birmingham, AL if you’ve ever been there.

World Showcase was really enjoyable, and I really wish we had more time to spend there. Noah and I both agreed we could easily spend a whole day just exploring that. Bring your walking shoes though – it’s a huge circle and requires a lot of walking. But really interesting and really beautiful!

Emmie got a little treat too!

Emmie started her coin collection this day. If you need a fairly inexpensive and really special souvenir from the parks, these coin pressing machines are everywhere – each time she saw one, Emmie got to press a penny to remember her trip. Just bring a roll of quarters and pennies with you and knock out a souvenir with some meaning behind it for not a lot of money!
We also did Soarin’ and Spaceship Earth that afternoon – for some reason I can’t find the pictures from those, but definitely two must-dos (and must Fastpass because of long waits) for Epcot. Spaceship Earth is just a neat, classic ride, and Soarin’ was so cool – you feel like you’re flying through the sky.
There was so much more to do at Epcot than I thought. This was the only park where we didn’t get to squeeze in everything I wanted to do. I would have liked to give Noah a chance to do Test Track, and I wanted to try Mission: Space, but we just didn’t have time. There isn’t a ton for little kids to do, but there is a ton to do! I can see this being a lot of fun for families with older kids.
That night, we had dinner reservations at ‘Ohana! If you do one sit-down dinner at Disney, make this it. This was by far our favorite meal of the trip.

Emmie, who never, ever falls asleep in the car, was out about 5 minutes into our trip to The Polynesian. She was on day 3 of skipping a nap and had been going full-force all day!

She rebounded quickly though!

Our reservations could not have worked out more perfectly. We were booked for 8:00 and sat down shortly after. The fireworks at Magic Kingdom just happened to be starting right about that time, so we got to see them from our table! They even sync the sound in ‘Ohana up to the fireworks so you can hear what the people at the parks hear on the loudspeakers. 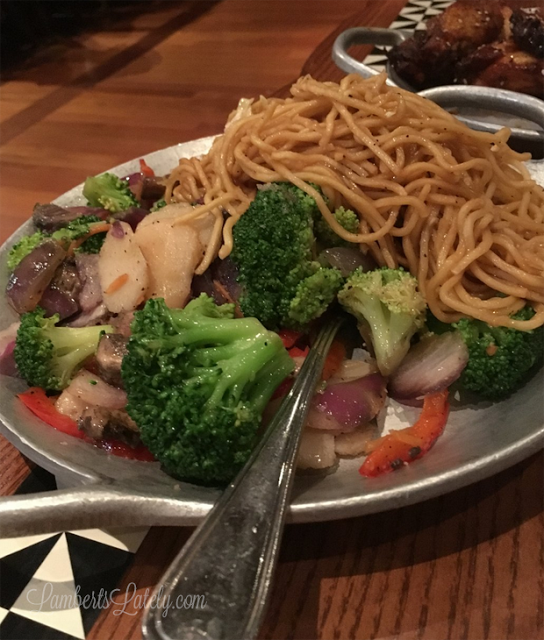 This is a table service meal, but isn’t a buffet – instead, they bring family-style entree servings to your table. The pork dumplings (so good) and wings were our appetizer, with the salad, and your dinner is served with veggies and noodles.
As you eat, they bring grilled steak, shrimp, and chicken to your plate. I am not kidding – I think the chicken might have been the best I’ve ever had in my life. I had two servings of the shrimp, and I couldn’t really eat much of the steak (it is served medium), but the little bit I snuck was great. 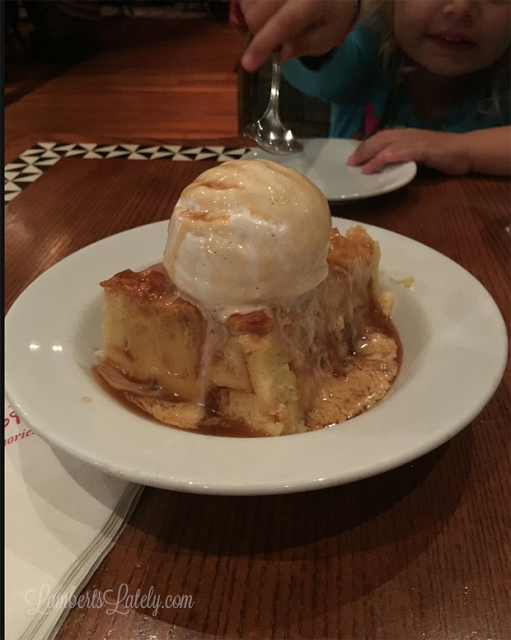 You also get a family serving of bread pudding for dessert. Noah, who absolutely hates bread pudding, loved this. Insanely delicious.

The ukulele player serenaded Emmie after our meal!
This was by far, no question our favorite dining experience at Disney. Totally believe the hype about this restaurant. Reservations are hard to get, but it’s worth trying! Be prepared to be so full when you leave!

We had reservations early the next morning at Hollywood & Vine in Hollywood Studios. This is a character meal – standard breakfast buffet food, and you get to meet Jake, Sofia, Doc McStuffins, and Handy Manny!

Emmie spotted The Good Dinosaur as soon as we got there. The movie isn’t even out yet and she’s obsessed! 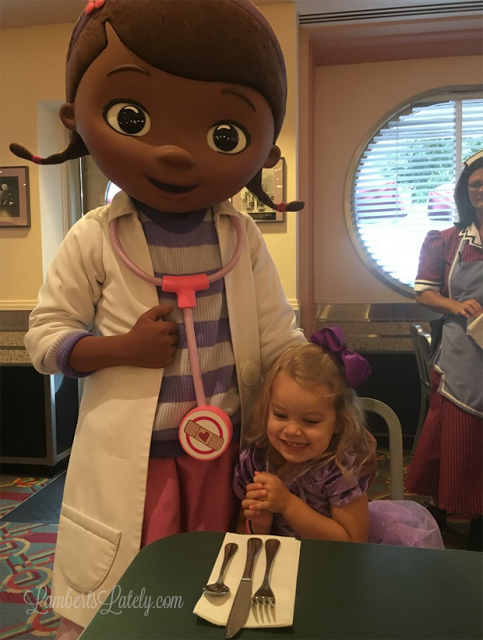 Handy Manny and Doc came to our table basically as soon as we got there. It’s actually kind of nice getting the characters out of the way at these meals so you don’t have to constantly look for them while you’re eating!

Like I said, you had standard breakfast buffet food at this one. Nothing special, but not bad either. They have a great Greek yogurt bar and and omelet bar too.

I’m not sure if you can meet these characters anywhere else in the parks, so this is a good one if you have Disney Junior fans in the house! They also have opportunities to dance/sing with the characters, but Emmie was kind of sleepy this morning and sat those out.

Next, we headed to Toy Story Midway Mania. Definitely, definitely do a Fastpass on this one if you plan on doing it! The lines get out of control quickly. It is really fun for both kids and adults!

We stopped by the Honey I Shrunk the Kids playground for a few minutes and went to Muppet Vision 3D. Really cute and funny.

…and pressed another penny!

After that, we stopped by the For the First Time in Forever: A Frozen Singalong. This is a really cute show that ended up being entertaining for adults and kids (they have a lot of jokes that are actually pretty funny for everyone). Loved this one!

Next, we fit in The Great Movie Ride (ok, but I this it was a little bit above Emmie’s age range). 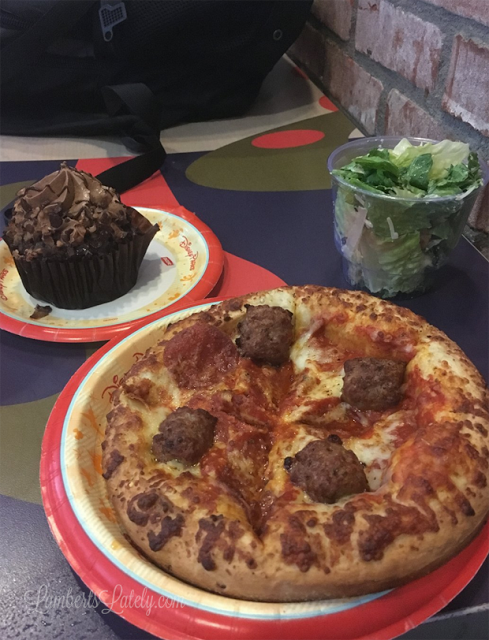 Then we stopped at Pizza Planet for lunch. They have pizza that is actually pretty good and an incredible Cappuccino Cupcake for dessert.

Emmie also loved the games (just FYI, you do have to pay for these).

This picture is from Star Tours, one I had to sit out. Emmie came out saying it was “scary,” but I think it would be a lot of fun if you have a Star Wars fan.
Our last stop of the day was The Voyage of the Little Mermaid. It was a stage show that Emmie really liked. It doesn’t fill up quickly, so no need to waste a Fastpass on it (we did and it really did no good).

And I can’t leave this out…if you’re in Hollywood Studios, you have to pick up a Carrot Cake Cookie from the Writer’s Stop. It’s the best carrot cake I’ve ever had in my life. We bought three of these total on the trip…even Noah, who isn’t a big carrot cake fan, loved this one. (And it’s a snack credit!)

And we were done with Hollywood Studios by around 2! This was definitely the quickest park to knock out…if you’re on a limited schedule, combine this one with half a day at Magic Kingdom. Since we had a full day for it, Emmie and Noah went back to the hotel for some pool time!