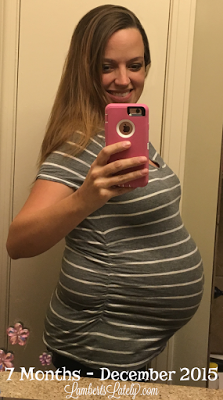 We’re really rolling now! Only 2 more months at most until this little guy is here. I’m definitely feeling it too (more and more each day)!

Here’s what Jackson and I are up to these days. All of my other monthly posts (for both pregnancies) can be found here!

Size of Baby: You know those fun fruit/vegetable measurements that most pregnant women use each week? Let’s go on and throw those out the window for this guy. 🙂 As of my 28 week appointment, he was measuring 31 weeks…almost a full pound over where he was supposed to be (and the ultrasound tech measured everything about him, so that’s not just one inaccurate measurement). If he was measuring on time, he would be about the size of a coconut (about 3.3 pounds and 16 inches), but he was estimated at 3 1/2 pounds 3 weeks ago…so I’m going to guess he’s slightly larger than your average baby.
Total Weight Gain/Loss: My weight gain has really slowed down since last month. As of 7 months, I’m up about 25 pounds. But trust me, what I lack in weight gain I’ve more than made up for in size – the belly is HUGE. I’ll occasionally do that belly measurement that the doctor does with a measuring tape, and right now it’s at around 34 weeks. My doctor measured last week and I was about 2-3 weeks ahead, so that’s probably still pretty accurate.
Maternity Clothes: All day every day. Really, I’m in mostly yoga pants and t-shirts these days, but if I put “real” clothes on maternity is a must. (The only exception is my beloved Old Navy The Flirt Skinny Jeans that, miraculously, still button.)
Gender: It’s a boy! Jackson Lee Lambert
Movement: We’re getting lots of big movements these days! I can see body parts moving across my belly all the time, and he usually has a few minutes every night where he goes crazy. And I’ve noticed a few hiccup sessions this month! He’s definitely more active in the afternoon/evening. He’s also running out of room…my ribs are taking a beating lately. I’m starting to notice him slow down some just because there’s not many more places for him to go.
Sleep: Still really not bad, but I am starting to get some of the pregnancy insomnia I had with Emmie. I want to stay up all hours of the night, but I’m usually wide awake early in the mornings too. And it is getting more uncomfortable by the day…it’s just not possible for me to sleep anywhere close to on my belly (how I normally sleep), so it’s just kind of awkward to get used to.
What I miss: Starting to miss functioning normally…walking without pain/waddling, eating anything I want and not worrying about whether it’s pregnancy-friendly, sleeping normally. I can definitely do this for 2 more months though…or at least that’s what I’m telling myself lately! 🙂
Cravings: I’ve been so surprised by my lack of cravings during this pregnancy. Nothing has really stood out as a big craving! I do have a little bit more of a sweet tooth than normal and I get really thirsty sometimes, but no big “must-haves.”
Symptoms: Starting to get pretty achy, especially in my hips/legs. LOTS of contractions too…I’ve had several nights that they were happening every 5-10 minutes for hours. I talked to my doctor about this last week, and he wants me to take it as easy as possible to try to calm them down, so I’ve been a pretty big couch potato lately. But if I’m on my feet for more than 10 minutes or so I’m probably having a contraction (and they’re getting more intense/slightly more painful by the day).

A little moody and still having the anxiety problems to an extent, just feeling kind of large overall! And, I found out yesterday that I failed my first glucose test (that would explain some of the extreme growth spurt Mr. Jackson has seen in the last month or so). I go in for my second one next week, but I’m pretty sure I already know what it’s going to tell us. Lots of positive vibes next Wednesday morning, pretty please!

Best Moment This Month: Celebrating our last Christmas with just Emmie! It’s been a little bittersweet but so, so special.
To compare, where I was at this point with Emmie…

…and my progression shot!

So here’s the deal…I’ll be back in a couple of weeks with month 8, much earlier than I normally do these. My doctor mentioned scheduling a c-section for somewhere between February 8-10, so I want to make sure I get in the 8 and 9 month posts in time! Plus, at this rate, I will be shocked if I make it out of January still pregnant. Time will tell, but Mr. Jackson is already much more ready to make his debut than his big sister was!