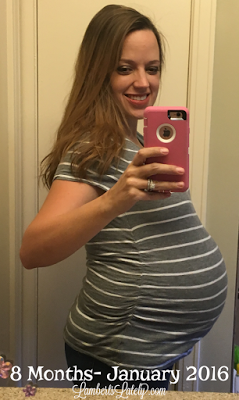 Ok, I moved the monthly pregnancy post up a little bit this month because…

a) the doctor moved my due date to from February 18th to February 15th (like it really matters at this point….)

b) WE HAVE A C-SECTION DATE!!! If I make it that far (and I think that's a big if at this point), Jackson will be born February 9th.

So I wanted to make sure I fit in the last two monthly posts if at all possible. Crazy to think we're in the last month of this pregnancy!

Here's what's going on with Jackson and Mommy at 8 months.

Size of Baby: I don't even want to start to guess. If he was measuring normally, he'd be about the size of a cantaloupe…4.75 pounds and 18 inches long. But I think we all know he's bigger than that.

If this tells you anything, the first words out of my doctor's mouth after measuring my tummy Wednesday were “now how big was your first baby?” He wouldn't even tell me how big I was (I believe his exact words were, “don't worry, you're there”). Even though I haven't had an ultrasound since 28 weeks, my belly has consistently measured 3-4 weeks ahead, so I'd go on and guess he's whatever a baby at around 38-39 weeks is measuring.

Total Weight Gain/Loss: Amazingly, I'm still only up about 27-29 pounds, depending on the scale and time of day. I attribute most of my slow weight gain to my recent diet (more on that below), and trust me, it is ALL in my belly…I really can't tell a big difference in the size of the rest of my body. I'm scared to see what the tummy situation looks like after pregnancy. I started using coconut oil on it this week for a little bit of insurance against stretch marks, but I think it's a lost cause at this point.
Maternity Clothes: Oh yes, full-time! Honestly, most of my maternity doesn't really fit that well at this point. I've reached the “t-shirts that are too big for Noah” stage of pregnancy…I could live in his shirts and my looser yoga/pajama pants!
Gender: It's a boy! Jackson Lee Lambert
Movement: Starting to slow down a little, especially in the past week. I think he's just out of room in there! I'll get a good jab to the ribs every once in awhile, but not nearly as much as he was doing. He loves hanging out on the right side of my belly for some reason. Now as for me? I'm a waddling fool right now, mostly because it feels like somebody punched me in the pelvis most of the time. You definitely have to give me a minute or two to get anywhere.
Sleep: It's not really terrible, considering our stage in the game, but I'm just really uncomfortable most of the time. It's hard to turn over in bed and I feel like I constantly have to turn. And I must, must sleep with a pillow under my belly and in between my legs. I wake up so sore if I don't.
What I miss: I'm really starting to miss being active. I'd love to go work out normally! Lots of foods (again, see below), sleep, breathing…we're getting to the glamorous part of pregnancy. 🙂 (I think I can, I think I can…)
Cravings: GIVE ME ALL OF THE CARBS. I feel like a real life version of this right now…
via GIPHY

So I don't know if I mentioned it…I failed my first glucose test. My doctor ran an A1C test on me a few weeks ago, and I did well on that, but he still has me on a low-carb diet, just as a precaution, since everything is measuring so big. I've had to really limit my carbs for the past two weeks, which is pretty tough for me during pregnancy…that's what I usually live on. I'm not as strict as somebody that's full-on diabetic (no blood draws or strict carb counting), but I have to be careful. So really no sweets and limited bread, pasta, potatoes.

So I basically want to take a bath in chocolate sauce right now. And I just might once I get this baby out.

And I don't know if this counts as a craving, but I've been drinking lots of lots of water. It really seems to keep the contractions at bay and just generally makes me feel better!

Symptoms: Pretty sore most of the time (really feeling it in my hips and my back), feeling very stretched. Some contractions still…they've been a lot less frequent than they were in the last couple of months, but the ones I'm having now definitely pack more of a punch. Starting to get some shortness of breath, and I'm tired most of the time.
Best Moment This Month: We're (finally) starting to get everything squared away! I have clothes sorted and we're going through all of the baby gear this weekend, just to make sure we have everything. Pediatrician is booked, surgery is booked…we're pretty close to just needing the baby!

I really don't think I'm much bigger or smaller, but definitely carrying differently…I look (and feel) like I'm much lower this time!
And a little progression shot… 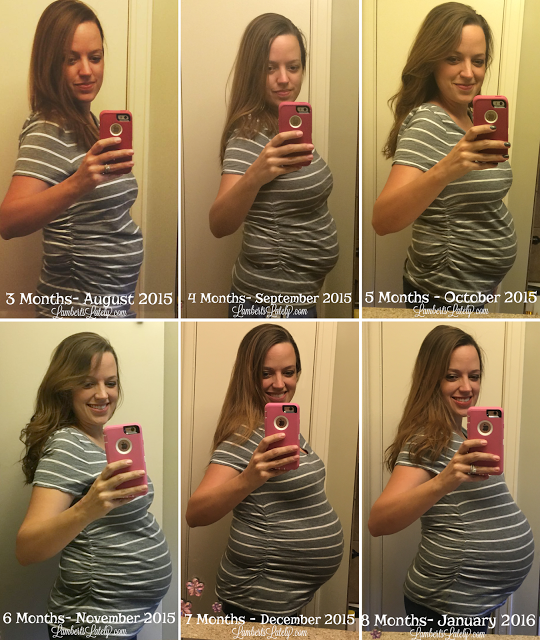 You can see my previous posts (for Jackson and Emmie) here!