874 shares
This post shows how to organize school papers by year – keep those memories without having to keep all of the paper! Remember your kids time as a student without keeping a ton of stuff.

Once upon a time, I was the mom that swore I would never throw out a single thing my babies made at school. I mean, the horror! How could you get rid of something your child put all of that effort into making?

And then I had a kid in school. And totally got it.

There is so. much. stuff.  Every single week Emmie has multiple notes, pieces of artwork, and worksheets come home with her. And I honestly love seeing every single bit of it! It’s fun to get a little peek into her day at preschool and watch her learn. But holy moly…some things just had to go. 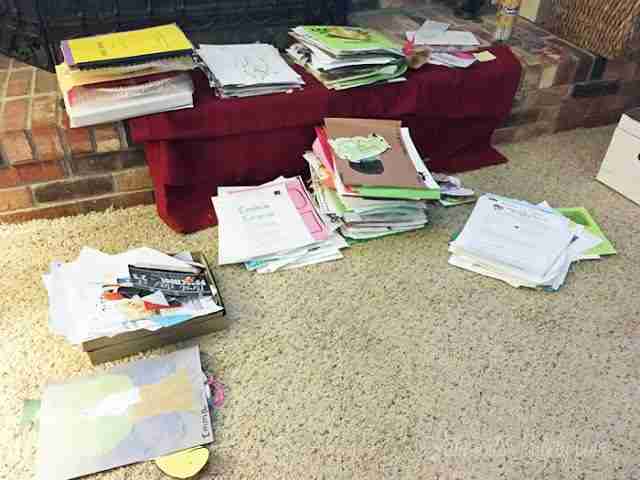 Up until now, I haven’t really had a method for dealing with the clutter. I saved every little thing, in one big box, and just said I would deal with it later. Well later showed up. For the past couple of weeks, I’ve worked really hard to organize and get a good system for dealing with school papers. I thought I’d share it with y’all today!
(Affiliate links used in this post.)
Step 1:  Have an everyday collection site. When Emmie comes home from school every day, I have a collection site for any and all papers. If it’s something that’s urgent, I leave it out (so I don’t forget to pay/respond/etc.), but all finished school work, newsletters, and notes go in the collection bin (similar to this one). It stays at a convenient spot in our kitchen. This is really where all everyday papers in our house go; so if I have a receipt I need to save for later, a random piece of mail, or even a photo I’d like to save, I put it in the bin. 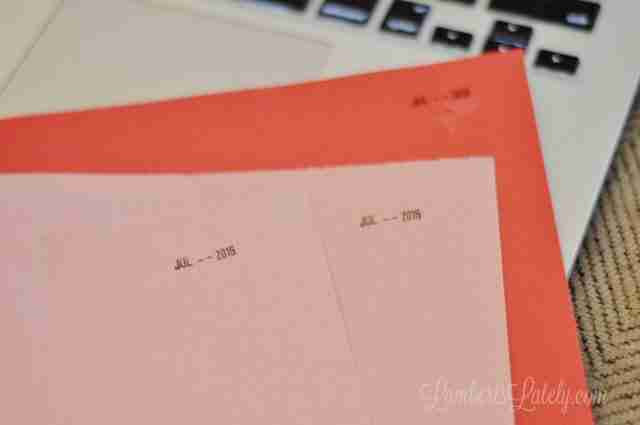 I have it on my cleaning schedule to clean this bin out once a month. When I clean it out, I deal with different school papers a little differently. For school work, I stamp the back of it with the month and year (using this stamp) and it goes in a big box (I use an old copy paper box…perfect size!). It all stays there until the end of the school year, when I’ll deal with it all at one time.
For notes and newsletters: I read this post a few months back and have really been working on implementing it in our home. I love the idea of having as little paper as possible in our home and being able to search for any possible document on my smartphone or computer! So far it’s going really well and I love the system.
So, I organize our school notes in a similar fashion. When I clean out the bin, I scan every note into Evernote using their phone app (it’s so easy…you just take a picture of the note with your phone and it is able to convert it into a searchable document!). Once I’ve taken pictures with my phone, I head over to the Evernote app on my computer to organize everything. 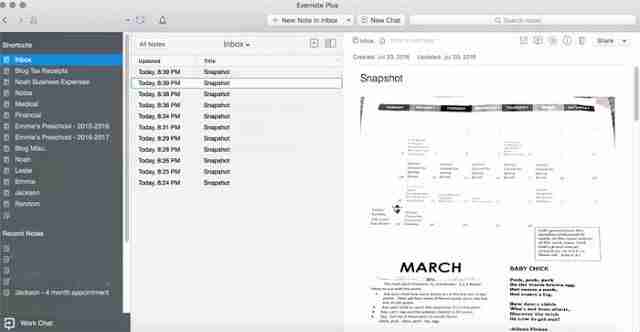 I have a notebook in Evernote (over on the left-hand side of the app) just for Emmie’s school notes. Once they’re scanned in, I change the name from Snapshot to something relevant (this one, for example, would be March 2016 School Calendar) and tag them with appropriate labels (this one would get a “2016-2017,” “newsletters,” “Emmie,” and “school” label). Then, I put it in the Preschool folder and throw away the paper version. It’s there in my Evernote account if I ever need to refer back to this particular note!
I like having the notes in Evernote because the documents are searchable. It’s so easy to just look it up in your Evernote account if you ever need to know something quickly! So, let’s say I needed to look at a newsletter from the first week of January 2016. I could just type “January 2016” in the search box of my app and every document that had mentioned that date would pop up. Pretty cool, huh? But, on the flip side, I wanted a way we could have Emmie’s school work out and be able to enjoy it for years to come. So, more on how I did that in a second.
Step 2: Once a year, take photos of every piece of work. (Yes, all of it.)  At the end of the school year, it’s time to organize that huge, messy box of school work! Once a year I get everything out and take pictures of all of the work from the year. 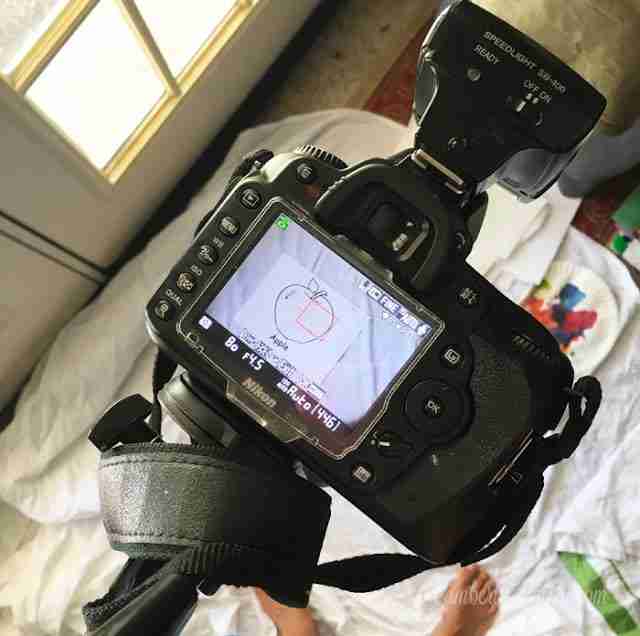 This is so much easier as a two-person job. I spread a white sheet (white poster board would be great too) and set up my camera on a tripod (I use this one…it’s inexpensive and does the job well). Noah had the huge pile of school work and I took the pictures…as soon as I would snap a picture (doesn’t matter if it’s straight or not, as long as it’s all in the image), Noah would change out the paper. It really didn’t take too long doing it that way (probably less than an hour). We set up by a window so we would have the best natural light.

Once I upload my pictures, I straightened them out and cropped the sheet out (as much as possible) using just plain old iPhoto (it was actually a lot easier than doing it in Photoshop to me). We’ll come back to these pictures in a minute.
Step 3: Prioritize.   This next part is something that Emmie and I work together to do. I want her to have a say in what work she’s most proud of from the year!
Emmie and I worked together to find the best work from the year to save. I told her we were saving 20 items, and we probably ended up saving 25-30 from this school year…I wasn’t super strict, but I also wanted her to realize the only the most important was going to be saved. I made sure to explain to Emmie that we had a picture of everything that we could look at any time, so she wasn’t really upset about throwing anything away.
We went through and she found ones she wanted to save (I didn’t really worry about the number of pieces she saved in this first pass). I told her that she might want to save things that can’t just be looked at, but need to be touched to really appreciate (like books, collages, and artwork that used different mediums than just paint/crayons). But she had pretty free reign on this part. I threw in several things I personally wanted to save too.
For the second pass, I made sure to emphasize that we could only save 20 items. We went through and found her absolute favorites from the “keep” stack.
Everything that didn’t make the cut went in the trash! The keepers went in a big file box I recently started for her. 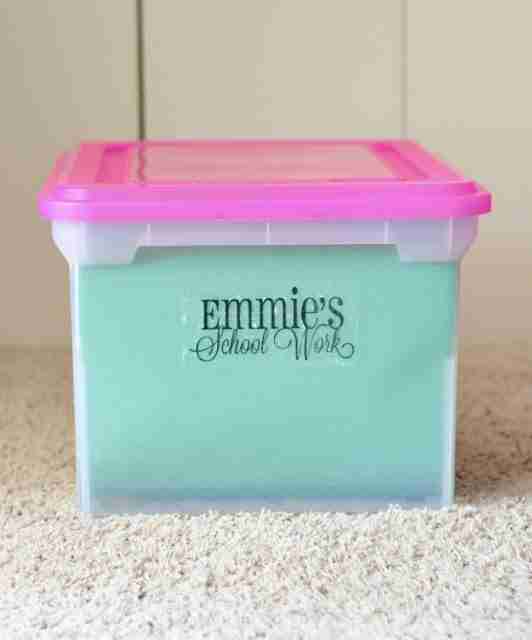 I’ve got one that’s ready to go for Jackson too. I labeled it with this method that I found recently. (Life changing. Seriously.)

Each school year gets a file folder. I used the extra capacity file folders and they ended up being the perfect size for the amount of work we’re saving each year! 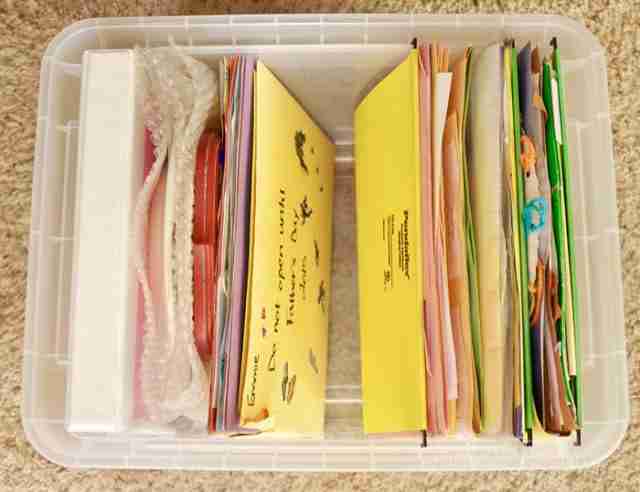 The file folders are in the front and extra special items from the year are in the back. That includes a scrapbook Emmie’s teachers make her each year, a special plate her preschool makes at the end of the school year, and a frame she holds in each of her beginning/end of the year pictures. I’m hoping to get at least 5 years of school in each file box!
Step 4: Showcase those pictures!  Since you have pictures of everything your child has done that year, show it off! I’m making a Shutterfly photo book of school work for each school year (and I’ll do that for both children). 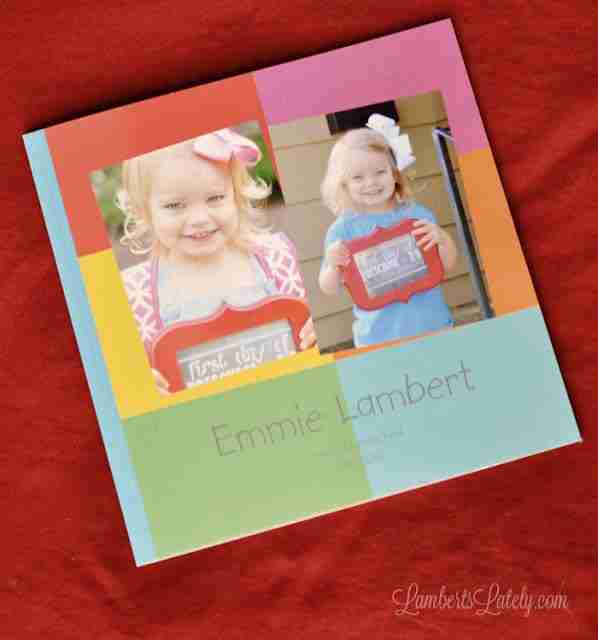 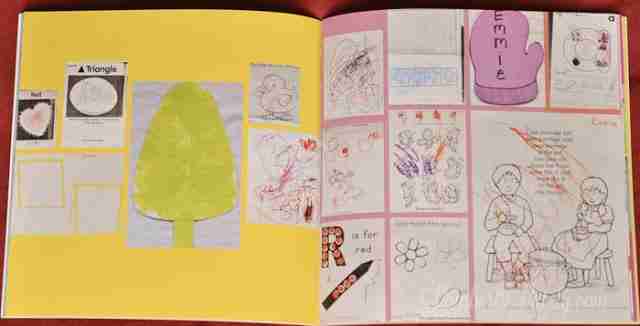 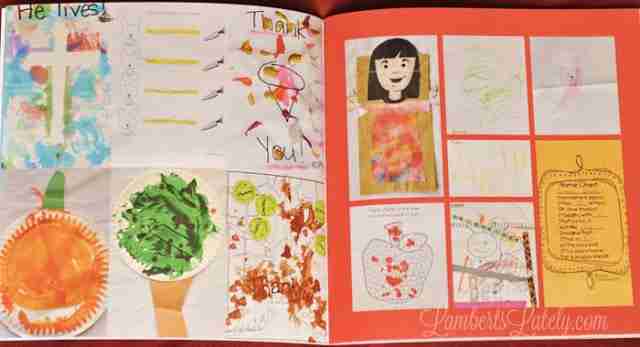 I really love how the first one turned out! It’s the perfect little way to remember each and every thing Emmie did from that school year. It’s already so interesting to see her progression! I don’t really have the items in the book in any particular order (too much work)…just kind of a random assortment of her work from the year.
This is a book we can keep in our living room to enjoy at any time. I love that all of that hard work can be enjoyed, rather than shoved in a box or drawer somewhere to never be seen again! And, if we ever want to see any of her actual work, we have the file box.
I don’t think it’s any big secret that I’m a complete organization addict, so this whole project has been a fun experience! Now that I’ve got the system locked down, it’s definitely something I’ll use for years to come.

Time Blocking is a productivity game-changer. By s

Everyone has a "last meal" picked out - this one's