When we moved into this house, I knew that the small closet organization were going to be a challenge. I’ve mentioned before that our current home was built in 1960 – so, as do most houses built back in that era, it has really limited storage space.

Luckily, even though the closets are a little cramped, we have a ton of them in this house…they are just laid out kind of awkwardly. We have one (smaller) walk-in closet in the master bedroom that’s really just big enough for one person..that’s the one I’ve used (with a few of Noah’s extra clothes and shorts). We also have a standard closet in both of the kids’ bedrooms (Jackson’s was storing a good bit of seasonal decor and my dresses), a coat closet in the kitchen (where we store coats and Noah’s suits), and two closets in the living room (one of which stores Noah’s clothes and all of our shoes). Confused yet? 😉 Because I know I was. 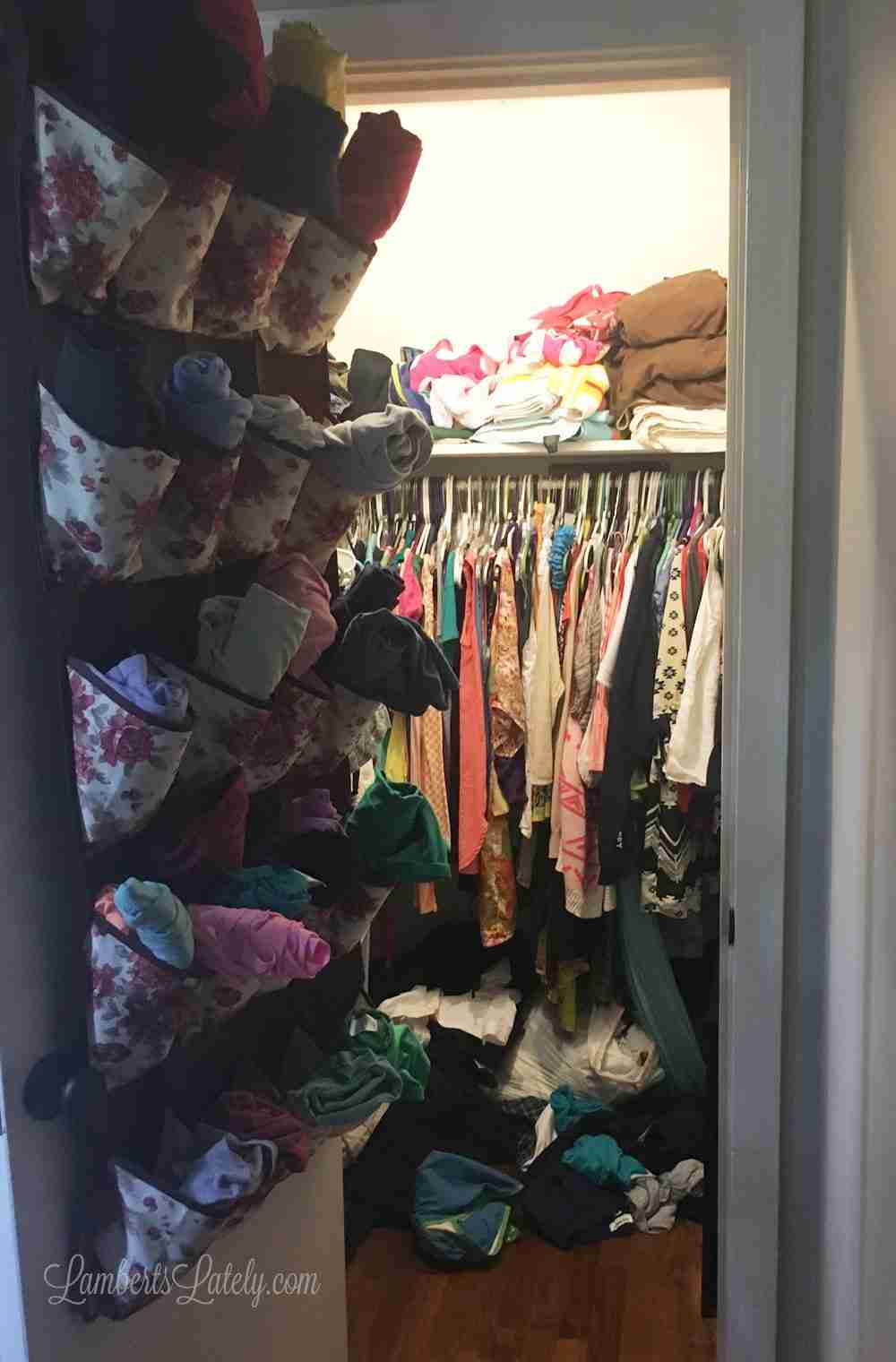 Over the years, they’ve all become one big hot mess. Random things have ended up in random closets, with no rhyme or reason to what closet holds what group of items. And honestly, organizing them has never really been a priority for me. 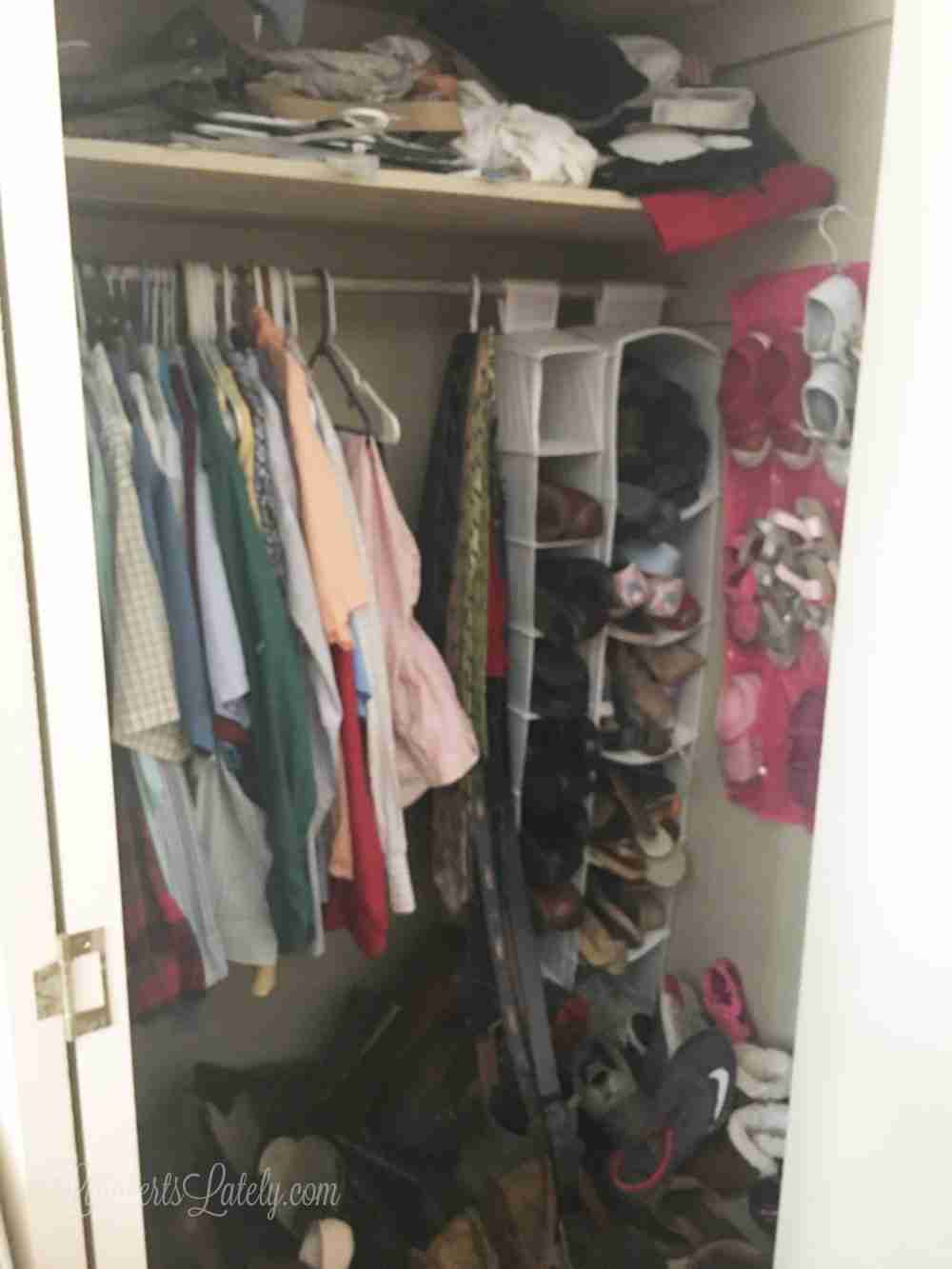 But, since we are gearing up for the move into the new house, I wanted to try to start organizing (and purging as needed) so we have a really efficient, easy move. The first places that absolutely had to be organized were the closets!

So, since we’re moving in 3 months, why not finally develop an organization system, right? 😉 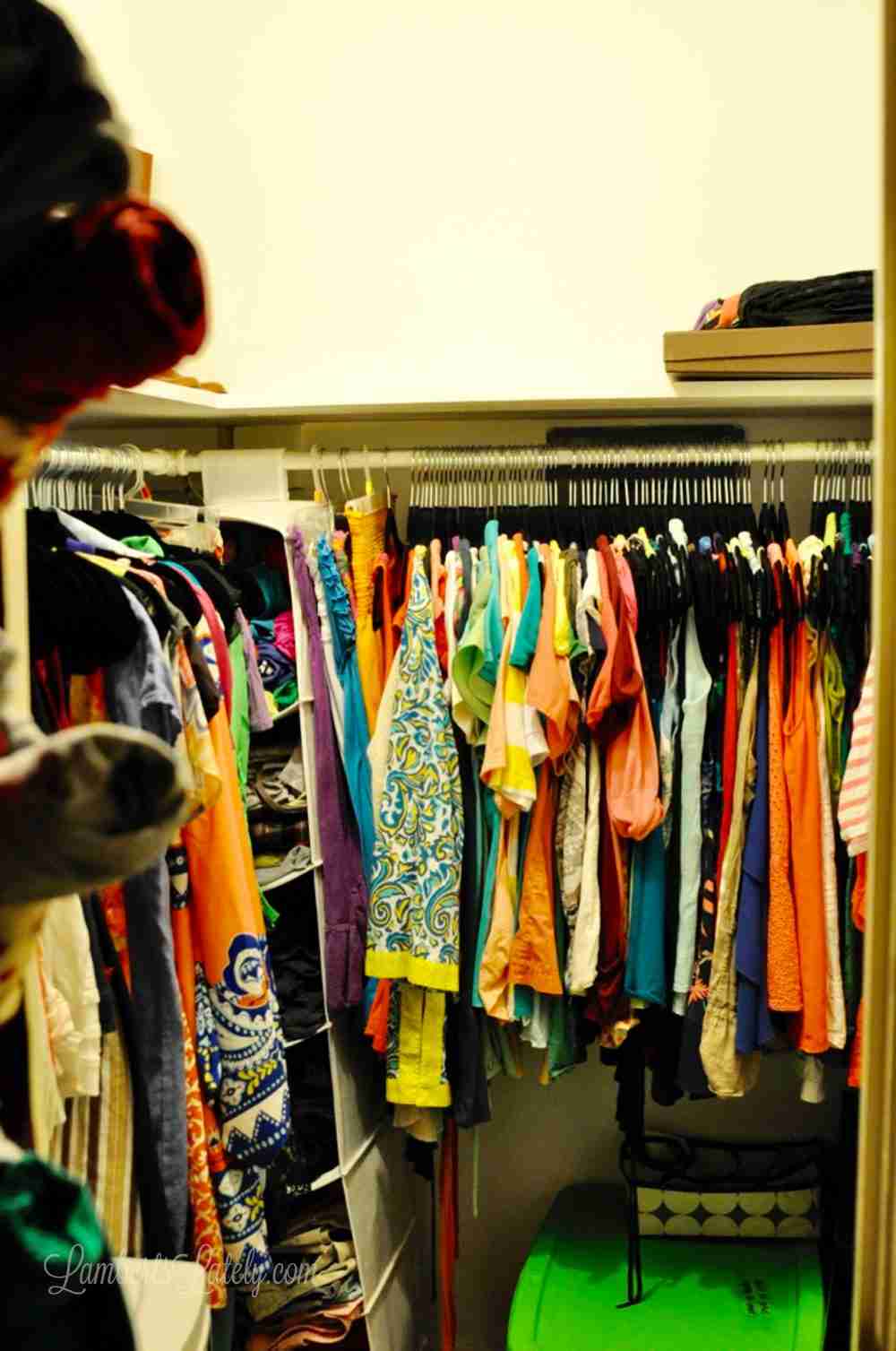 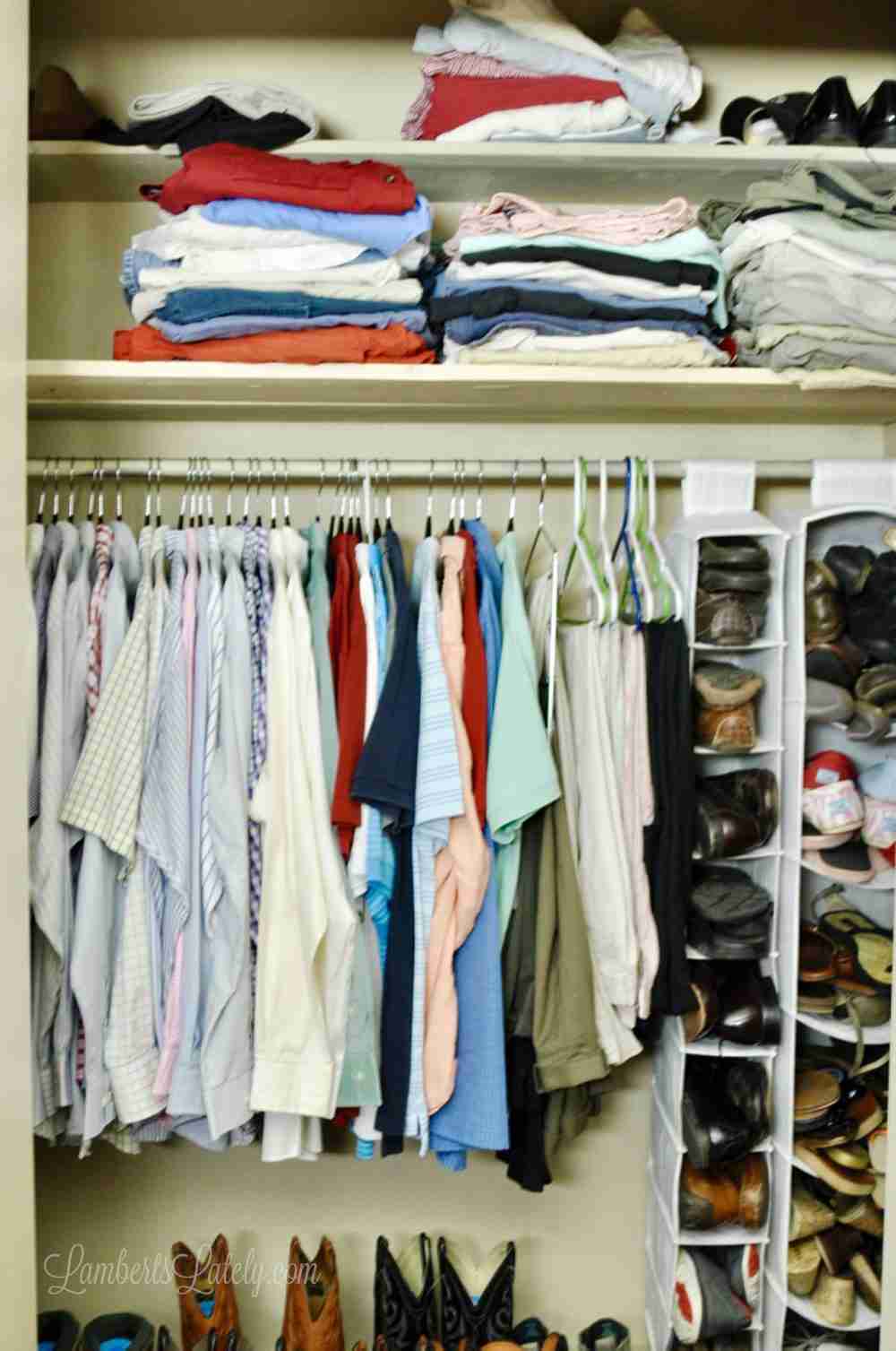 It feels SO much better to have everything sorted out – here’s how I did it!

(Affiliate links used in this post – find out more about my link use here.)

1. Take it alllll out…dispose as needed. First thing’s first…you have to figure out what you actually want to keep in your closet for the immediate future. First, take out all of your off-season clothing. Organize it into donate, store for later, and throw away piles (anything that had unrepairable damage went into this pile). Throw away what needs to go that day…don’t save it for later!

I posted this graphic a few years ago, but I thought it was perfect for explaining my purging process when it comes to clothing… 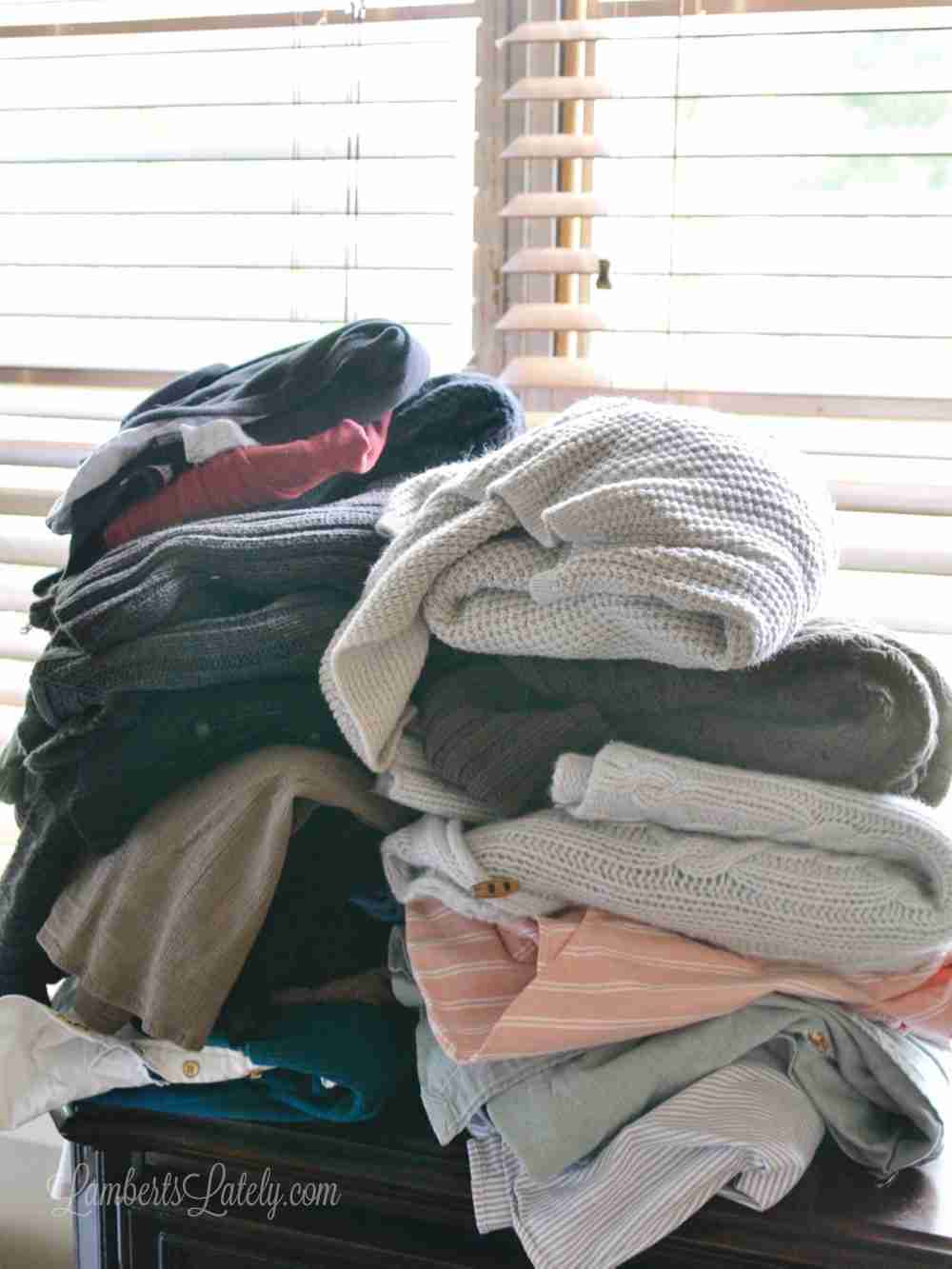 We have a neighborhood garage sale in late summer, so I’ll try to sell all of the donate pile in that first…whatever doesn’t sell goes immediately to the donation center (like, doesn’t come back in my house). I’ve always been a big fan of Schoola, so I’ll more than likely donate to that once the garage sale is over. 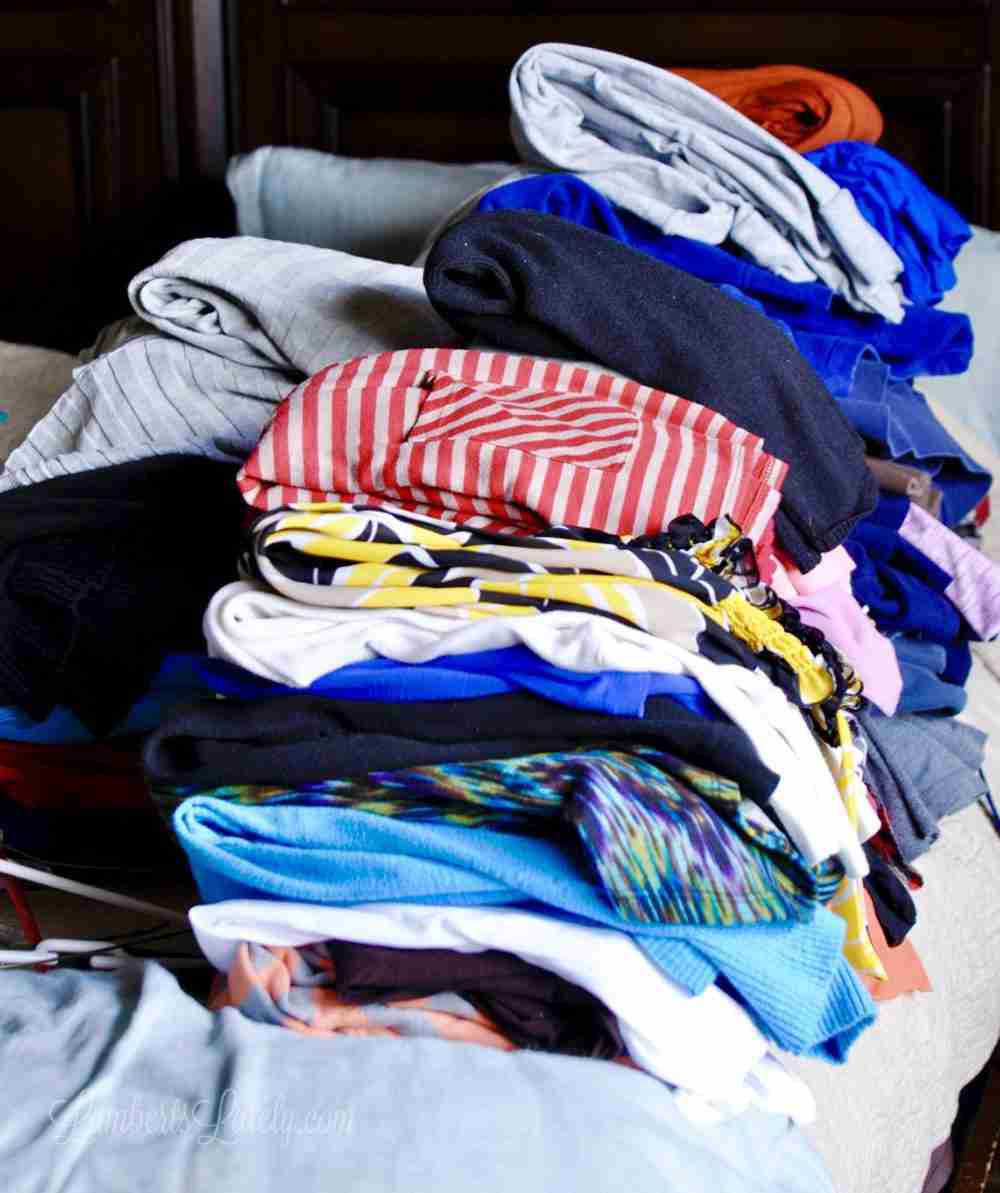 I also followed this process for seasonal clothing…sort into donate, throw away, and keep piles. The keep pile went back into the closet and the other two piles joined their off-season friends.

2. You should only see what you’re (currently) using.

We’ve taken care of the donate and trash piles, as well as the keeper seasonal clothing, but that still leaves all of the off-season clothing. There’s no point in hanging it in your closet right now if you’re working with limited space. I’ve found the perfect solution to storing off-season clothing in when you have no storage space… These vacuum bags are pretty inexpensive and an absolute life-saver when you’re working with small closets. I was able to get all of my winter clothing in 2 of the jumbo-sized bags! They’re also great for storing off-season linens (like flannel sheets or heavy blankets). Simply fill it full of clothing, hook a vacuum cleaner hose up to the nozzle (it comes with a pump, but I found the vacuum to be much more effective), and suck away! 😉 It reduced the storage space of these clothes by at least half, and it sealed them so any little critters and water couldn’t get to them when storing in the attic. 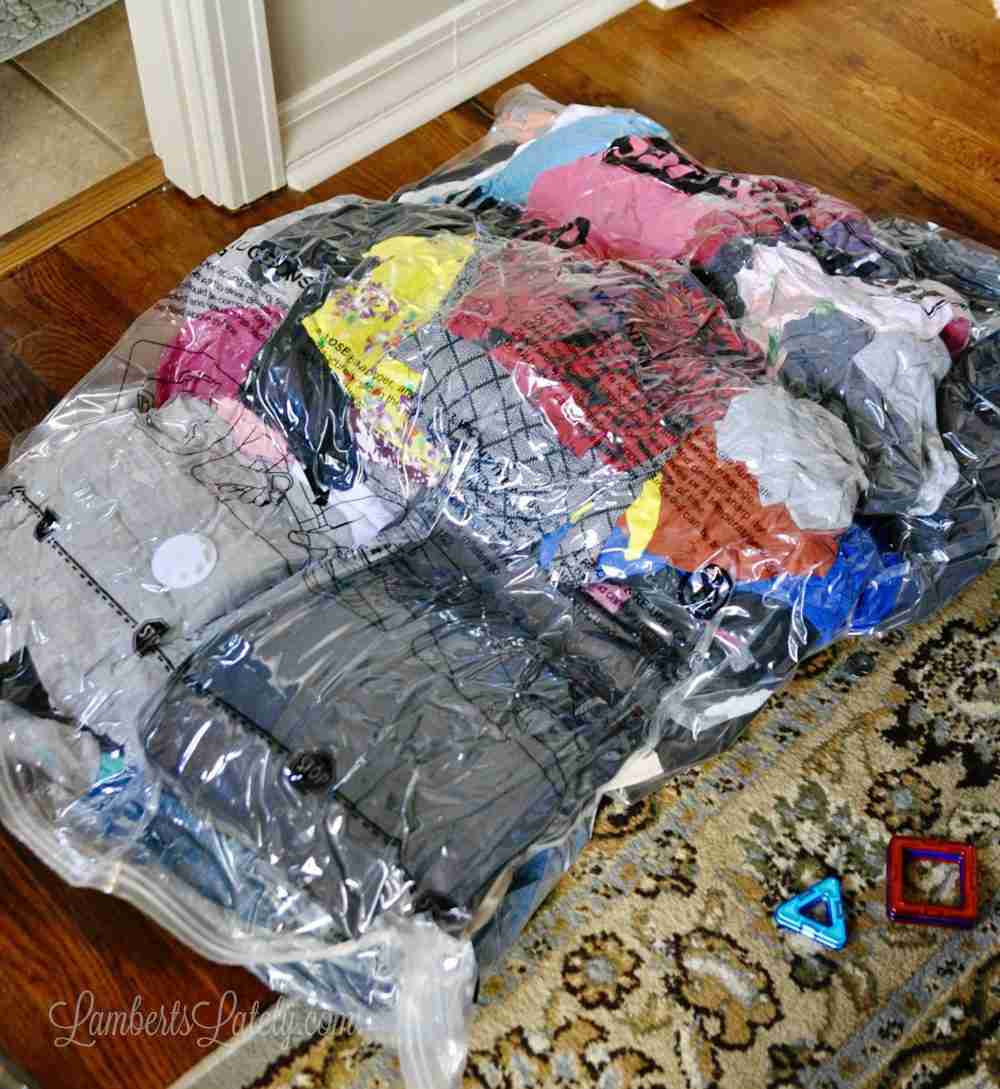 Can you tell my kids were playing while I was doing this??

This step alone got rid of an absolute ton of clutter in the closets!

For the first time in this house, I was able to fit all of my clothes in one closet! That was huge. This gave me the freedom to kind of section off the additional closets so we didn’t have a thousand random items scattered throughout each one. I designated certain closets to hold all of individual types/owners of clothing.

I made sure that Jackson’s and Emmie’s closets became their’s and their’s only. There is a little bit of extra space in each one, but having extra unused space is so much better than having things spread out all over the house. We kept the suits and coats in the kitchen coat closet because they took up almost all of the space in there and didn’t seem crammed in…if it ain’t broke, don’t fix it. I took all of Noah’s clothing and organized it into his living room closet. He has far less clothing than me and he doesn’t mind taking a few steps down the hall to get ready every morning, so this works for now!

And, perhaps most importantly, I kicked all of the non-clothing items out of our closet! That included towels and linens that cluttered up the shelving above my hanging rod. There wasn’t a lot up there, but having it organized instead of a huge mess of folded linens has made a huge difference in how it looked.

It is so, so crucial to utilize vertical space when you’re working with small closet areas! That includes shelving above the hanging rack, walls, and even floor space. 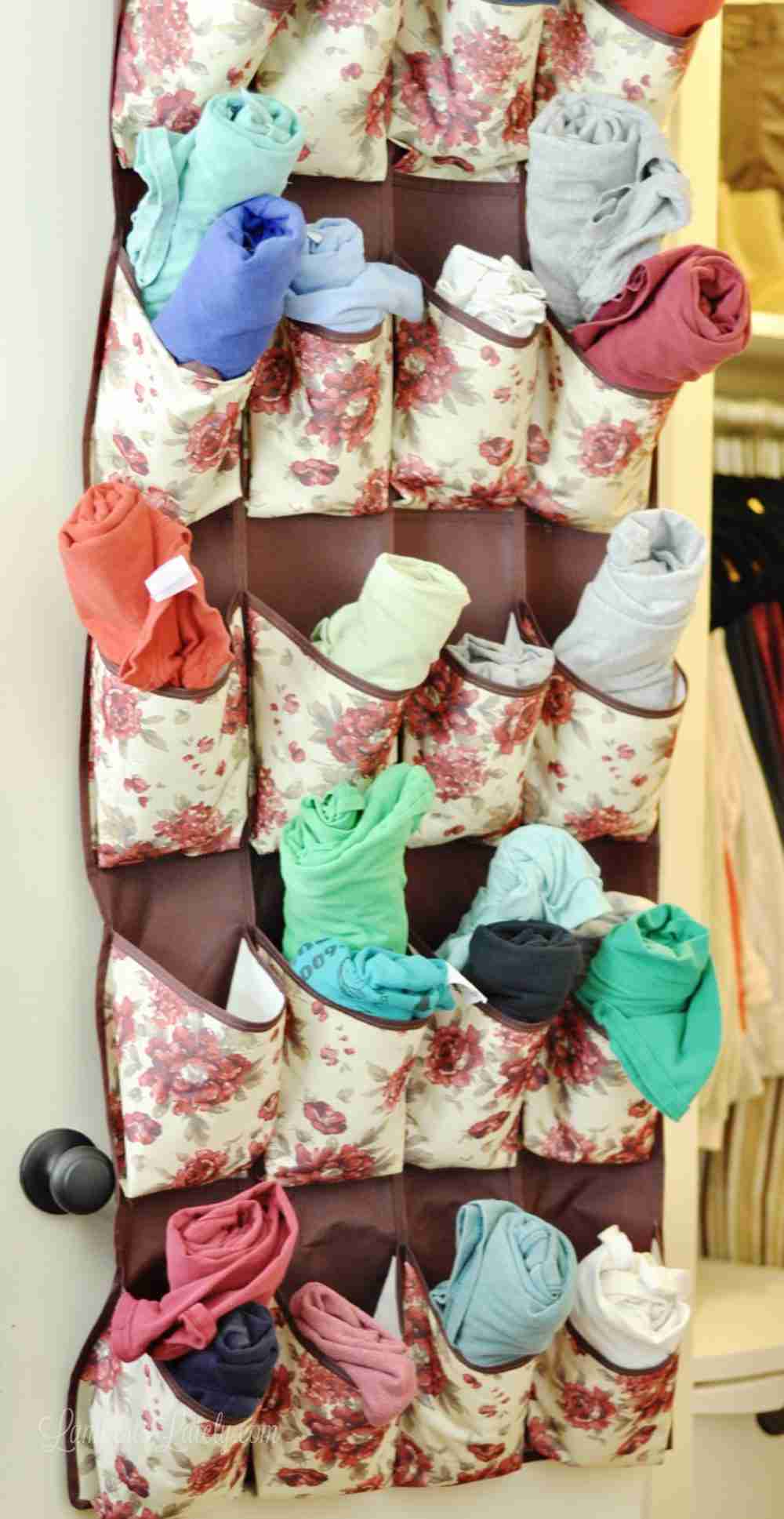 I use an over-the-door hanging shoe organizer (similar to this one) to organize my t-shirts. This started after reading The Life-Changing Magic of Tidying Up…it might not look like I took much from that book, but this is one thing I definitely adopted! I also roll all of my camis and Noah’s t-shirts and store them in a nearby drawer. 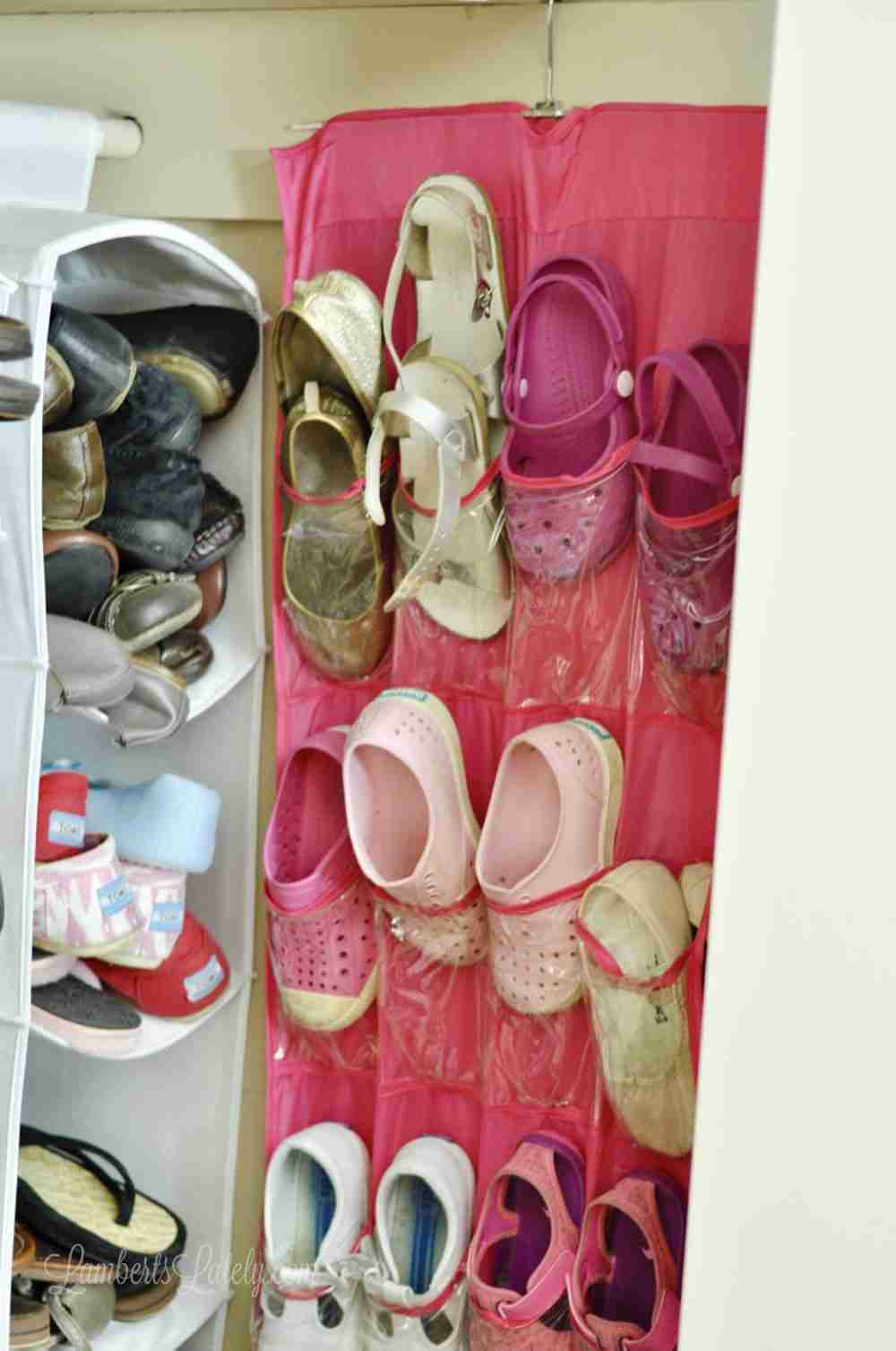 We store all of our shoes (besides my boots – see below) in the living room closet because that’s where it’s most convenient for us to have them. My smaller shoes are stacked in an organizer like this…you can’t see it from this angle, but Noah has one of these as well. I use something like this one to hang Emmie’s shoes. It makes it easy for her to grab them as needed (and, just as importantly, put them up as needed). Boots are always kind of hard to store just because they take up so much space…underneath a row of clothing or on one of your upper shelves is the perfect place! We use pool noodles to keep them facing upright so they sit straight (and not all over each other). It looks so much better and it’s a simple, cheap solution. I found these at the Dollar Tree!

But, to actually use that floor space for storage, you have to be able to see it, right? If you leave long-hanging clothes randomly throughout your closet, that’s not going to be possible without having a lot of awkward, hanging clothes all over everything.

That’s why I try to (somewhat) organize my clothing by length. I don’t get too hung up (pun 100% intended) on organizing every little thing by color/size/style/etc…that just seems to get too cumbersome and I end up giving up the organization system altogether. Instead, I try to make sure the clothing is all of similar length and type (pants, long dresses, short dresses, shirts all organized together) so I can utilize the floor storage space as much as possible. 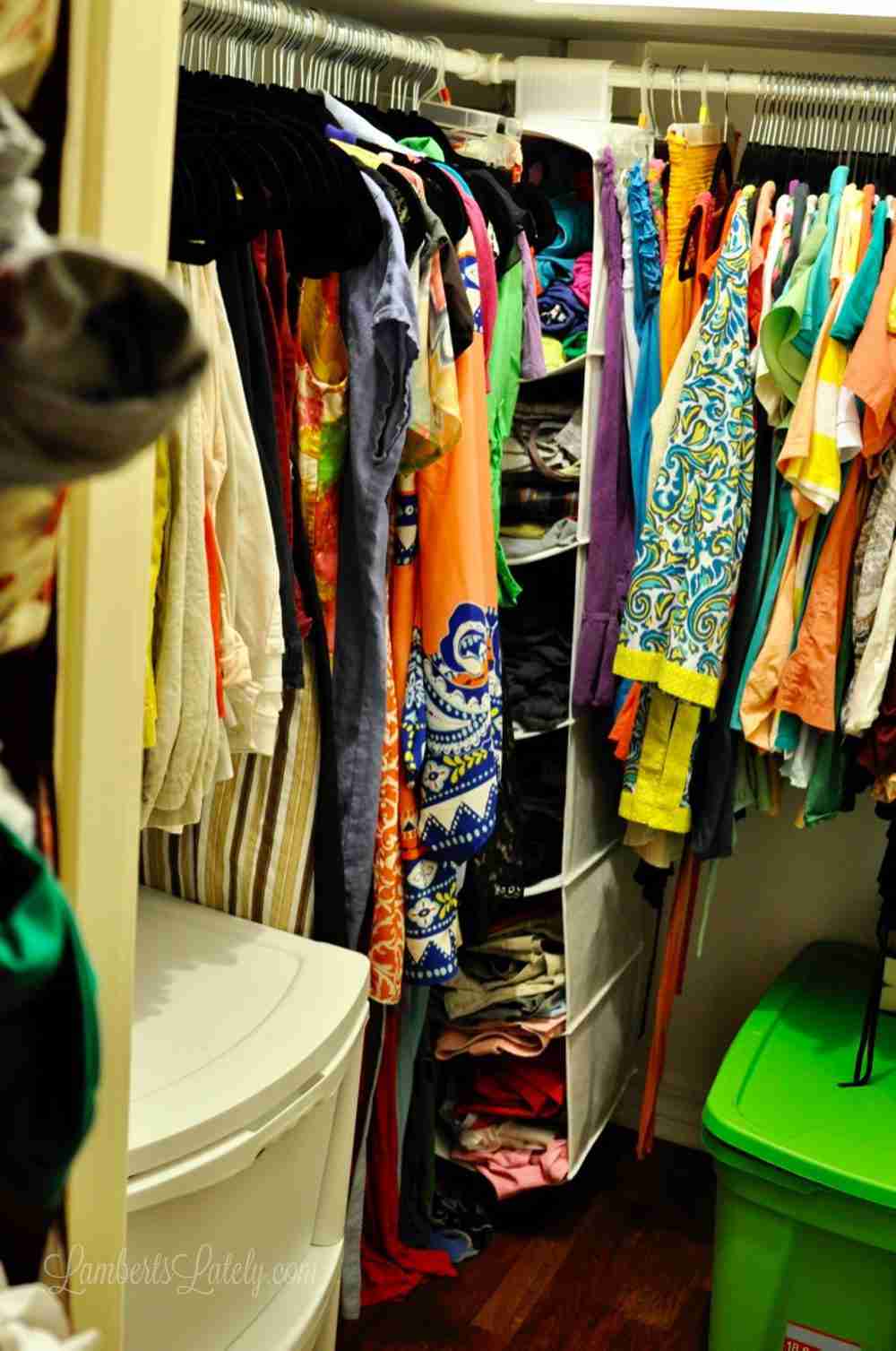 This storage bin (that used to reside in our playroom) now sits in my closet under the pants. It fits perfectly in that space and allows the long-hanging dresses to comfortably hang right next to it, without bunching them up or getting in their way. Such an easy way to add a little bit of storage to a cramped area!

I feel like this is so overlooked when organizing small spaces – you try to use every little small space you have until you’re completely out of room. It ends up looking like a cramped mess! Believe it or not, it’s ok to have unused space in your closets. It makes it look so much less cluttered and allows you to actually move around.

I left that shelf above my back wall of hanging space empty on purpose. I might add something to it later as needed, but I don’t have to fill it up. It gives the area a much roomier feeling.

7. Pick tools that maximize the space you have.

Once I cleaned out all of my unneeded clothing and organized what I had, I was working with a lot more room…but there was one glaring issue. The plastic hangers I had used for years took up so. much. room. Yes, they were inexpensive, but I could barely see my clothes because they were so bulky.

I took the plunge and invested in something I’ve wanted for the longest time – and it’s one of the best organizational purchases I’ve ever made! Noah and I now have the no-slip velvet hangers (you can find here) and I am so, so pleased with them. They take up so much less space. See that clothing above? That’s the same amount I had with the plastic hangers! It’s amazing what one little switch can do. There is also absolutely nothing falling off of these hangers. They have the best grip, and we haven’t had a single issue with them flaking off on the clothes yet (and we’ve used them for about a month now).

So, for three months at least, we have pretty, organized closets! I’m going to try to keep these organization ideas in the new home. We’ll have a lot more space, but the general ideas are solid and should help us stay organized no matter where we go. In the meantime, we’re enjoying our small spaces and maximizing what we can.

So, fellow small closet owners – what are your tips and tricks? Leave them in the comments below!

This is your chance to build an effective home cleaning routine from scratch in one week! This free email course also includes printables you won't find anywhere else.

Thanks for signing up! Check your email to confirm your participation and start the challenge.